Whether you’re starting a new job or just now delving into the specifics of proper meeting administration, the term “minutes” might not seem so familiar to you. But to those seasoned in meeting facilitation will no doubt be fully aware of just how prevalent this practice is in almost any professional environment.

But there remains a large part of readers who are more likely to fall into the former category. For those people, we’ve written this quick guide on meeting minutes, including an explanation of the few key segments that make the standard meeting minutes template effective.

What are meeting minutes?

While the term “meeting minutes” might not sound very intuitive, it’s likely better to try and understand the practice as the “notes” for the meeting. The reason why “minutes” is a term being used is that each transcript for meeting minutes often has a very specific format on what kind of information is expected to be noted while the meeting is going on as well as other key information regarding the meeting at hand. The format is likely to vary from team to team but setting one early and staying consistent is useful in properly organizing your meeting minutes.

Often, a scribe or minutes-taker is assigned for each meeting, either at the start of the session, on a rotating basis, or as a standing position for a team member. The file is then outlined and shared with the rest of the participants post-meeting.

What is the purpose of meeting minutes?

If you’re still confused about the exact purpose of having meeting minutes in every meeting, think of these documents as the best tool you can have for referencing important touchpoints that have been discussed in the previous sessions. Despite recordings of various forms being more prevalent the further we move into hybrid meeting practices, the usefulness of a short document outlining important items that have been deliberated upon still outshines the necessity of having to constantly rewind a recorded video or audio file.

Moreover, meeting minutes can better encapsulate your meeting and summarize key findings in short narrative forms. According to Indeed, meeting minutes can help attendees record task ownership, provide structure to the discussion, offer legal protection as an official document, and even measure project progress throughout your roadmap.

“It’s important that the right person take notes because the note-taker must be able to quickly determine which information is pertinent, and what can be left out” – Indeed

Minute-taking can be tricky for those who haven’t done them before. If it’s your first time, you might forget to note something down, miss a key point, or include too many unnecessary points that don’t add to the discussion. Lorman, a professional education services website, discusses several key points that can help you take notes better, which we’ve grouped into preparation, during note-taking, and closing.

“It is important for administrative assistants to provide clear information that attendees can refer to when questions arise later. Concise, understandable minutes can help resolve issues about details that people may forget soon after the meetings.” – Lorman Education Services

During the notetaking, refrain from participating too much in the discussion as the minutes-taker as this can distract you from being able to take note of your own key points as well as key points raised by others. Remain neutral to these very points raised as well as aim for accuracy when it comes to debates as well as decisions reached.

After you’ve taken down the minutes, make sure to properly condense and edit your document for any spelling and grammatical mistakes. Clarify any uncertain aspects you’ve jotted down with the meeting head as well as the relevant parties before sending it out to all attendees.

What’s inside this Meeting Minutes Template:

To help you prepare for your next meeting, we’ve included a simple meeting minutes template you can download here. The minutes of meeting sample template will include the following key points for discussion:

As part of any good meeting minutes document, it’s key to note down who is currently part of the meeting being held as this will indicate those who were present for the discussion as well as if the meeting had a proper quorum for any key decisions to be made. A roll call by the meeting facilitator, chair, or even the minutes-taker themselves can suffice here.

Before the official meeting discussions are done, a review of the previous meeting’s minutes (if any) is called for approval with the present members. The previous minutes should ideally be sent before the present meeting properly to allow participants to note down any corrections before final approval.

This part can be considered the main body of the discussion and the minutes sheet as it is essentially the reports from each participant or team present in the overall meeting. Be sure to be as accurate as you can when noting this part down as it will contain key information regarding present developments.

Motions are essentially off-agenda items or items that are separate from reporting that a team member would like to bring forth to the other members in the meeting. This can be a motion to extend the meeting hours, propose new projects, develop new teams, and other items that need agreement.

Similar to how the meetings are being started with a call to order, an official adjournment signals the end of the meeting held, meaning discussions taking place after are not likely to be recorded on the official meeting minutes. 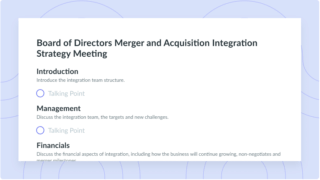 Board of Directors Merger and Acquisition Integration Strategy Meeting Template 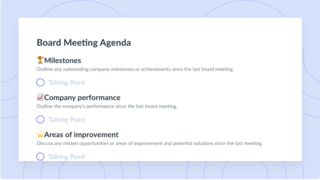 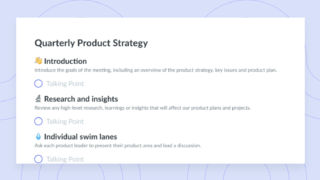